How to get your startup funded by the government, and why you might not want to 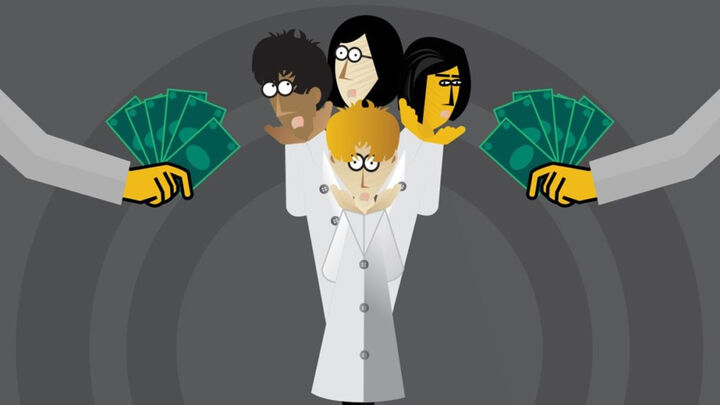 Back in 2012, I was awarded my first government research grant. I was a 24-year-old Principal Investigator - a decade younger than I was supposed to be - and I had no idea what I was doing.

This was exciting! Starting a company let me short-circuit the academic career ladder and jumped me a few rungs up to the Assistant Professor stage.

This was also terrifying. Who was I to be in this position? Are they really just going to give me money? And what’s with all of the acronyms?

This is a path that many deep tech startup founders must face. As a community, we don’t discuss it enough.💬Most topics I find are about the semantics. They’re more “Consider referring your KO to an OTA vehicle to simplify the FAR dependencies of your JE-RDAP” and less “what are we even doing here?”.

I want us to talk about it. Not the details💬There are already many great online resources to learn from!, but the big picture. By breaking the fire hose of government-funded research into digestible pieces, we’ll re-assemble a path to get you from young startup prospect to seasoned organization. We’ll talk about balancing government and startup incentives, managing impostor syndrome while learning on the job, and leaning on honesty and transparency to cover compliance capability gaps.

Before we get into that, we need to start with the obvious question. Why are you going after government grants?

Nearly everyone I ask gives the same knee-jerk response: Government grants are non-dilutive funding that can be used toward de-risking your technology. Why wouldn’t you go after them?

While this is mostly true, there’s also no such thing as a free lunch. By committing to write even a single proposal, you are making a strategic choice for your company.

One of the greatest pieces of life advice I have received is to always be intentional. Figure out what you want out of life and start doing it. Double down on what you like and cut out the noise. Reflect and repeat.

Companies are no different. To be successful, your company must be intentional by being in complete lockstep behind a highly specific mission.💬Deep tech companies can be uniquely great at this. Are you going to Mars by 2030? Eradicating ataxia? Converting waste to fuel? These are the sort of incredibly inspiring missions that will attract top talent (who are often more attracted by fulfillment and ownership than a stable paycheck). This is tied to your right to win, which needs to be similarly specific. Any deviation from your mission and right to win will distract your team and alienate your investors.

When done without intention, grants are a major distraction that will erode your company’s mission.

It takes time to write a good proposal.💬It’ll cost you roughly 80 hours of senior people’s time to write a proposal and there’s no guarantee of award. This is an opportunity cost. What would you put these hours into if you weren’t writing proposals? Many government grants will not align with your company’s mission.💬Don’t go writing proposals to develop non-mission-critical technologies just because your team is qualified to do so. Never deviate from your mission or right to win. Even when funded, government grants come with a high people cost.💬Hiring is hard. A government grant will take your seasoned team members away from achieving your company’s mission and distract you with working on hiring and training replacements. Winning too much government funding will limit your ability to control your own company.💬Government grants are contractual commitments to perform work for money. If the majority of your team is working on grants, then their managers cannot reassign them and the board loses its ability to control company direction.

With all of these caveats, many non-academic deep tech startups instead opt to completely avoid grants. This allows the company to control its mission💬…provided the company is well funded through other means but also comes with significant downsides. In the short term, it ignores millions of dollars in potential funding that could be put toward your mission. In the long term, it hampers the public-private partnership development that will be critical in your company’s transition from startup to sustainable organization.

Getting your grant policy right is walking a tight rope. You should not shut it off completely but you must also know your limits and not stray from your mission.

You must be aware that every grant you accept will limit your ability to control company direction. To be intentional, figure out and accept the organizational changes required to deliver on a grant before you apply.💬I often get asked “how much grant money is too much?”. There is no hard and fast rule, as some companies have missions that can be fully funded by the government and others do not. That said, I’ve found 10-30% of total funding as grants to be my acceptable “sniff test” range when diligencing startups.

Lead with intention and grants will become an engine for your company’s growth. A successful grant policy will grow into government connections, production contracts, manufacturing subsidies, favorable loans, and plenty more growth accelerators.

When we were handling our first government grant, we were a team of three. Shortly after being notified of award, I was asked a seemingly simple question: what are your overhead rates?

This is reasonable to ask most organizations. They have large enough teams and years of history, so they can predict their overhead rates. For a new three-person startup, however, it didn’t make any sense. What does overhead even mean to a company of three?

We were also asked to follow a large set of Federal Acquisition Regulations. They asked us about our information security, accounting systems, quality management, environmental compliance, and dozens of other smaller requests. These were well meaning but nonsensical to a team of three. None of us were compliance officers and we weren’t about to become them.

You are not compliant. I’m here to tell you that it’s okay… for now.

Avoid the urge to project competence to your grant managers and instead be open with them. “Look, we’re a team of three and could use some help” will go a long way when asked to a good grant manager.

Think about it from the grant manager’s perspective. They’ve already indicated that they want to fund your technology, but they could lose their job if they fund a fraud. The policies are in place to catch fraudulent behavior. What really matters is that they trust you.

Trust comes from transparency and honesty. Show you care by making an attempt.

Tell them you’re a small team without financial history. Send them your entire company’s expenses to date and present reasonable best guesses at cost and rates. Be open with them and actively seek feedback.💬You’ll eventually be asked about DCAA compliance and time tracking. Stick with firm fixed price (FFP) and push this down the road.

Put all the project documents in a single folder and keep it in one place. There’s your information security policy.💬A folder on one person’s computer that other computers can access is a perfectly fine system. You’ll eventually be asked about NIST 800-171. Leave it for another day. Once again, be open with them and let them know that you’ll get better.

Read every Federal Acquisition Regulation the government wants you to accept. Remind them that you’re a small company and ask if they’re willing to reduce the number of FAR clauses you need to handle. Once reduced, keep a document with each remaining FAR clause and how you manage today. Be honest. Keep the document updated as you get better.

Be transparent, be honest, and show them you care by making an attempt, and you’ll start building a trust-based relationship with your grant manager. Do right by them and they’ll continue to do right by you. It’s that simple.

You’ve received your first grant. Congrats! You’ve taken the first step into a large and complex world. There’s a lot more learning ahead of you.

While you should recognize that you’ve only begun your journey, you should also never let imposter syndrome get to you. Remember that everyone learns grant management on the job. We’re all learning as we go, and your path will be no different than anyone else’s.

You probably received something like a Small Business Innovation Research (SBIR) Phase I grant. This will provide enough funding to sustain a small team for a few months. At the other side of this, there’s promise of a Phase II award. This is an order of magnitude more money that could fund your development for years.

You need to start preparing for your Phase II grant now. You were given slack in getting your Phase I off the ground, but they’re going to tighten the rules for Phase II. In addition to delivering technically, they’ll want to see improvements across the board in your compliance systems.

Talk with your grant manager early and often about these needs. Openly ask them for their priorities and focus on getting them done.💬Did their department get burned recently by a company with fraudulent accounting? Make sure you have a pristine system going into Phase II. Avoid the urge to feign competence and instead ask them questions every chance you get.💬They want to see you do well and will almost always be willing to answer your questions to help you along the way.

After a successful Phase II, you’ll start hearing about the ever-elusive Phase III.

“Phase III” mostly means “figure out what comes next yourself”. You’ll have opportunities to win >$10m contracts, which can truly be company defining if done right.

Be intentional. Don’t chase something down solely because of its cash value.

Be honest. Know your weaknesses and be ready to put your own time into shoring these up.💬You’ll have to learn the differences between funding sources, contract vehicle types, and the incentives of organizations within the government. Be ready for the learning curve.

Finally, if you’re in a position to go after a Phase III award, you’re now a seasoned organization and will be expected to act like it. Hire full-time specialists who can help your contracting, accounting, legal, and IT compliances.💬You may also need quality, environmental, safety, FDA 510(k), or other compliances depending on your company’s product. It can be a lot! Hire trustworthy consultants who can help you navigate the politics of Phase III. Make sure your teams are in place and your company is fully committed to jumping into its next stage of growth.

Be intentional, be honest, and never stop learning. Take these to heart and you’ll be able to use grants to turn your deep tech company into a rocket ship.