I wanted to write this post to correct a mistake I see time and time again: using the wrong type of screw. When you’re pressed for time, it’s easy to grab a handful of screws and use what’s on hand without much thought. However, you’ll pay for this with interest as these screws fail and you’re inevitably called to fix the messes you caused.

This happens not only in industrial settings but also at home. For anyone who’s hung something without a drywall anchor, you have firsthand knowledge of the damage that can be caused by improper screw selection.

In this short tutorial, we’ll go through a few screw types and why these screws are needed for specific use cases.

There are lots of thread types and lots of standards. While we don’t need to go into every thread designation, it’s important to get a feel for why all threads aren’t the same. Check out below: 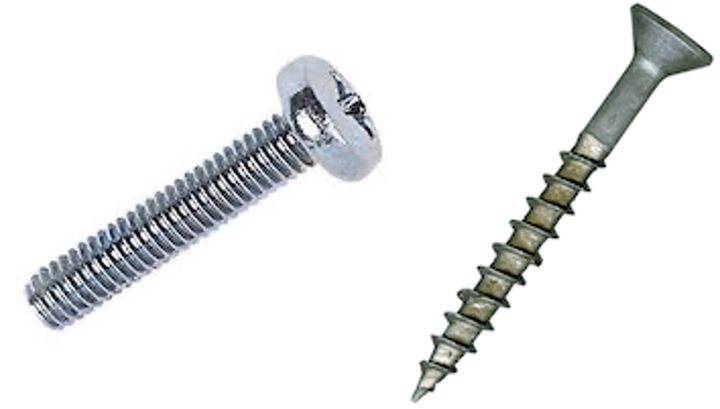 On the left is a machine screw. It has straight uniform threads that are closely spaced. These are used for screwing into machined metal (hence the name) where the hole is threaded, or used with nuts and washers to clamp things together. Think assembling something from IKEA. On the right is a wood screw. It has a pointed tip and widely spaced threads. The tip helps bore it into wood, and the wide threads are intended to grip into the deformed wood.

What I’m trying to show here is that the thread has a taper, or a slight inward angle. This taper makes each turn require more torque, as the threads get slightly wider as the pipe gets deeper. This is why you have to use wrenches with this type of thread.

Machine, drill, and tapered threads. This will cover the majority of the threaded fittings you’ll encounter in standard work.

There are a bunch of pipe thread standards💬Just like any other standard!, but the one you need to know for US piping is National Pipe Thread, or NPT.

One quirk with standards is the introduction of “trade sizes”, or sizes that are a total lie. Check out below for common examples:

The important takeaway here is that you can’t fit an 1/4” NPT thread into a 1/4” hole, so you shouldn’t trust the NPT trade sizes as a measure of actual size.💬This is also true for most other pipe standards.

You obviously just screw the pipes together, but there’s a lot of little errors I see all the time. Let’s talk through some of the common ones:

There is a standard “turns past finger-tight” metric for NPT threads. It’s 1.5-3 turns for <1”NPT, and 1-2.5 above. You may think that tightening more makes a better seal, but the opposite is actually true. If you overtighten, you will damage the threads and weaken the seal.

1.5-3 turns is a big range, so here’s my general advice: use smaller wrenches! Smaller wrenches will allow you to feel the resistance of the thread, whereas bigger wrenches will just plow right through and likely cause some damage. Ideally, put the adjustable wrenches away and only use fixed-size wrenches. These are designed not only to be the right screw size, but also the right lever arm length.

Use the same material

If you mix materials (e.g. stainless steel male into brass female), the harder metal (stainless steel) will wreck the softer metal (brass) and you won’t get a good seal.

If you really need to, I’d recommend ensuring the harder metal is the female part and that you go really gentle with the wrench. But seriously, just get the right part from McMaster. It’ll be in the next day.

A common practice in connecting two things is to have a mushy bit (aka a gasket). The mushy material will compress to form a gas-tight seal. For pipes, people commonly use teflon thread tape. Always apply thread tape before connecting metal pipes! The only exception is for attaching two plastic fittings, for which tape is not used.

The key here is to keep pulling the thread tape tight as you apply it, and to apply it clockwise (here’s a youtube video). The NPT standard is to wrap the thread three times.

A pipe is thick-walled and rigid, a tube is thin-walled, and a hose is a reinforced flexible tube. There are weird quirks between pipes and tubes/hoses, which I’ve heard explained as: a pipe is used to transport something, and a tube is used to construct something. Keeping this in mind usually explains the quirks.

For example, pipes are generally categorized by inner diameter (ID) and tubes by outer diameter (OD). I explain this as people care about things like pressure drop with pipes (which is calculated by ID), and people care more about fittings/geometry with tubes. Transport is generally eyeballed with tubes (ie. ‘1/4” ID seems reasonable’ instead of doing the math).

With tubes, you’re more likely to use specialized fittings such as compression/Swagelok and VCR. Pipes are often threaded in the US and flanged in the EU.